The Origin Story of OneQode.

Call it what you like, there isn’t a gamer on the planet who hasn’t experienced it.

For anyone lucky enough to not have experienced it: it sucks - a lot.

It becomes a huge roadblock to being competitive, or even just enjoying the game.

Imagine trying to catch a ball, but your reaction speed is twice as long.

Your focus? On your network and not the game.

For gamers, this is the difference between virtual life and death.

A wireless last-mile internet provider for gamers. Well, that’s what we thought we were starting.

The important part was the mission: better internet for gamers.

We eventually found ourselves launching an international carrier network, with reach far beyond our borders. The path had changed but the mission was the same.

But before we get to that, we need to go back to the beginning.

The elephant in the network

Our internet speeds ranked 67th globally — and providers weren’t getting any better. They prioritised cost over everything.

The worst thing? None of them cared about latency.

It seemed like the only people who could fix gamers’ internet, were gamers.

Once upon a time, there was hope for Australia, the national broadband network (NBN). The biggest infrastructure commitment in Australia’s history. A fibre to the premises promise. A huge vision.

But as it rolled out, it failed in scope and speed.

Gamers were left out in the cold. We were on our own.

It was clear if we wanted help, we had to help ourselves.

We wanted to create another option that would offer better connectivity than traditional last-mile internet — and eliminate unnecessary latency for gamers.

For most people, last mile is “the internet”.

This has always been the pain point. The final portion of the network that connects to your home, where the resources to ensure speed are spread the thinnest.

To welcome gamers in from the cold, we’d just need to fix last-mile — or so we thought.

As a small startup, the cost to compete on these terms would be huge.

Wireless last-mile technology had been quietly improving, so we threw some dishes on roofs, and took our first steps as a provider.

How hard could it be?

As soon as the data left our hands (aka the last-mile) the quality plummeted (just like that pizza). We couldn't guarantee a good experience, especially when gamers connected abroad.

So we ventured upstream.

Internet infrastructure is like a river. The widest portion of the river carries the most data, splitting into smaller streams closer to its destination.

We started wireless last-mile to clean up the streams, but for a startup, this was a lot of ground to cover. Worse? The river was being polluted upstream.

When we went upstream, we realised that the situation was worse than we thought.

You see, internet providers have to connect to the wider internet, too. To do this, they buy connectivity from larger “carriers” upstream, who have massive global networks.

But a familiar problem reared its ugly head. Carriers weren’t bothered about quality either. They:

All our efforts downstream would be pointless unless this was fixed. It was out of our control.

To deliver great internet for gamers, we needed end-to-end control of the infrastructure.

And if you want something done right, you’ve got to do it yourself.

This all felt a bit like this scene from Malcolm in the Middle:

Hal from Malcolm in the Middle fixing a light bulb

Until our future partner RTI Cables landed right in our backyard.

What do a giant pineapple and the fastest cable to Asia from Australia’s east coast have in common?

See, the internet isn’t magic. To travel from continent to continent, your data joins billions of other bits and bytes on a vast network of subsea cables.

When we decided we had to connect internationally, it looked like we had to go through Sydney.

But thanks to RTI we could connect to the cable that gave us the fastest pathway overseas. The best part? We were the first to connect to it.

We still needed the data to be handled with care throughout the entire journey. Sadly you can’t label data “this side up”... yet.

The Sunshine Coast landing station connected us with the United States, Tokyo, Hong Kong, and Singapore, with one pit stop between us and them. But without presences on all sides, we would have to hand off our data.

Once again we ran into a familiar problem.

That one stop for all our data? Guam.

I think you can see where this is going.

Moving upstream meant we needed someone with experience in “carrier land”.

Ben’s spent his career building carrier networks — the fundamental layer the internet is built on. Carrier network architects are a rare breed in the industry with only a handful of them in Australia.

Ben’s a scientist at heart, and scientists love to experiment. A couple of years before, following a whim, Ben had tested the latency between Guam and APAC regions. In two years he’d receive the results via email. You know, the kind of thing we all do on our lunch breaks.

He promptly forgot about the whole thing.

Google Taiwan held a 15ms ping to the University of Guam for two months.

Guam had been an interchange. But if it could become a meeting point, the possibilities were massive.

Ben realised that with Guam as the backbone of an international network, you could create a latency-neutral location to serve billions of gamers.

Matt still refers to Ben as “Mr. Guam” sometimes. Since his experiments, Ben had gotten to know the island like the back of his hand.

So once RTI connected us to Guam, the opportunity was clear.

Guam could be APAC Central.

A server in Guam, however, was still easier said than done. To take full advantage of Guam, we would need presences on the other ends.

By setting up in Guam, we’d begun a global network. The next steps would allow us full control of our data.

Across the whole region.

If you love something, let it go

We were at a crossroads.

But by trying to root out the problem at its source, we’d moved away from last-mile.

Two OneQode’s existed. Which was going to serve gamers better?

So we took stock.

While we’d gone upstream, bigger players entered last-mile. Giants of telecommunications meeting the demand of skyrocketing needs in a pandemic.

So what had we done in that time?

During Covid, all without “squillions” of dollars (as Matt puts it)

So instead of going toe-to-toe with giants, we stood on their shoulders.

There was no one else upstream addressing the issue at its core.

“It’s best to sail with the wind,” says Daniel McGregor, OneQode’s Chief Financial Officer, on our move away from last-mile connectivity.

What we had built had the potential to be huge for not only Australian gamers, but the entire APAC region.

So we ditched last-mile to focus on our high-performance, latency-optimised international carrier network. That meant that other providers — and their gamers — could benefit from our work.

None of this made it easy to leave last-mile behind, it was the relatable issue for gamers.

But we’d built a kickass international network. And we were doing things nobody had done before.

For game developers, it would reach more people, quicker. Maintaining a healthy population of players, especially during non-peak hours.

For gamers, this would mean better connections, quicker matches, and most importantly a fairer game.

Decision time. Increasingly, that decision was looking like this: 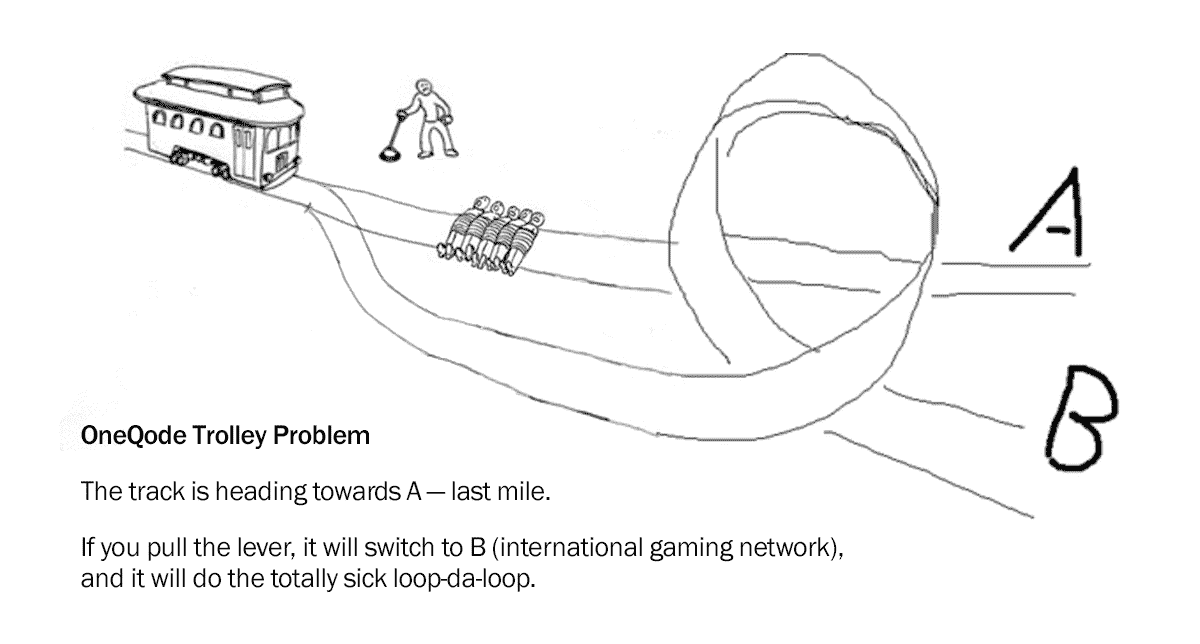 To best serve gamers, it was time to play to our strengths. Connecting more people through Guam.

We’d found a way to help gamers across the world — far beyond our backyard.

Now we had to make it happen.

Guam was deployed, so we took the lessons we learnt and expanded our points of presence.

To Singapore. And Hong Kong. And Los Angeles.

With these locations deployed, we’d honed our skills and perfected the recipe.

Deploying any point of presence is a massive undertaking.

Our team was ready for the challenge though, and successfully deployed international points of presence during the pandemic.

Then, we needed gamers. Not just any gamers, but the kind of gamers who would recognise the difference we were making.

It was kind of a big deal.

96 players. 9 countries. Matches that were impossible before Guam. All live-streamed globally.

The end of the beginning

OneQode has evolved and transitioned into a serious operation.

We’re working with game studios and server providers to increase their reach throughout APAC.

We’re also helping enterprises build networks that span continents, giving them a regional backbone unlike anything they’ve had before.

The most important thing is this: we’re improving the experience for end-users across the Asia-Pacific — connecting more people at lower latency.

And this is just the beginning.

By building to a gaming standard, our platform is ready for anything. But it’s not just for gamers.

We’ve built it for the technology that doesn’t exist yet. Technology that’ll push the boundaries and connect more people than ever before, in real-time.

Pioneering isn’t easy. You have to forge your own path.

Prakash V, founding investor and our chief of operations, always reminds us to “stay curious”.

We always knew the destination: better internet for gamers across the region. The route we took wasn’t the one we expected, but now that we’ve carved our way forward we wouldn’t have it any other way.

The freedom to adapt was central to this journey.

Our mission is clear: make latency imperceptible, and break down barriers to the virtual worlds that are being created.

Most importantly, it’ll mean uniting gamers across the world.

We hope you’ll join us on the road ahead.

This is just the start.

Thinking of taking on the world? We’d love to help.